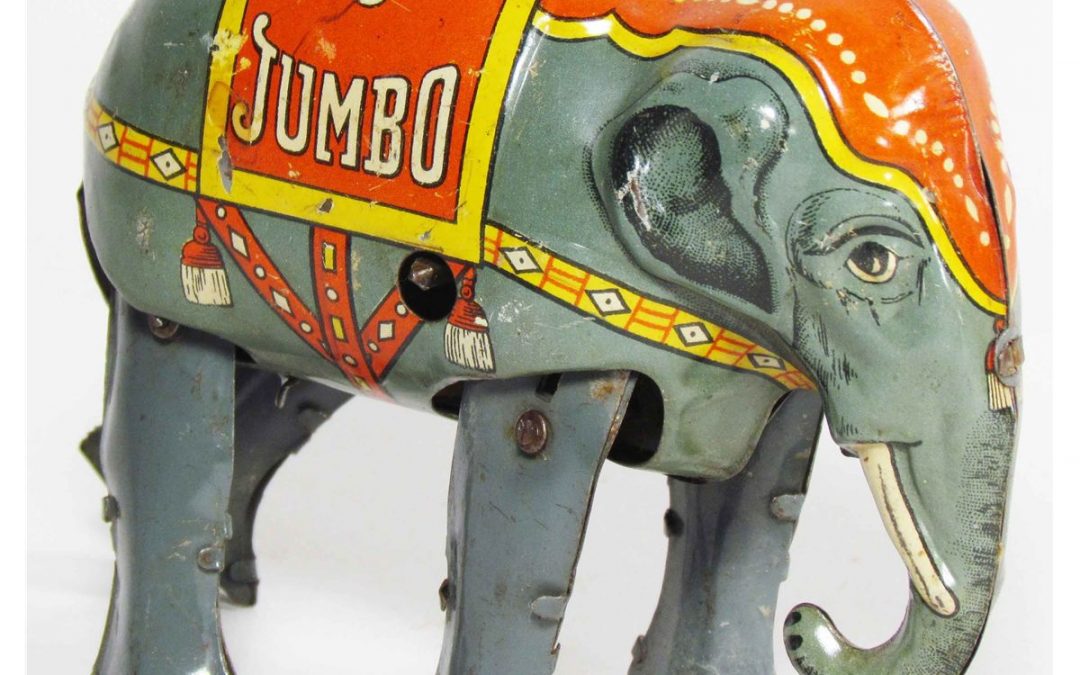 The roar of the lions, the grace of the acrobats, the crazy antics of the clowns and the laughter of the crowds are all part of the excitement of a circus. The thrills and chills are shared by child and adult alike. Though as children once played with trains, dolls, trucks and hundreds of other toys that represented adult life, the lure of playing with toys from circus always left children with hours on end of fund and pleasure.

Then as now, the fun and pleasure of collecting circus toys from the past is an intriguing hobby. Through toys of this nature were made in every media imaginable such as wooden circus toys by Schoenhut, paper and cut-out toys in magazines and books, cast iron wagons and clown banks by Kenton and others; even materials such as clay, paper mache, glass and tin were made.

Collecting tin circus toys is probably one of the most enjoyable because they can be made to look so realistic and especially the key-wind and movable ones can be made to perform almost any act or show form a live circus. Lithographic printing on tin can produce such fine details and realistic feeling that is truly an art unto itself.

One fine example of tin lithography is the rare Jumbo The Circus Elephant (pictured). A four color process of red, yellow, blue, and black, Jumbo represents a fine work of art truly a prize in any tin circus toy collection. A key-wind toy, only four inches tall, Jumbo walks with the grandeur and majesty of any true to life elephant.

The A.C. Gilbert Company of New Haven, Connecticut who produced the American Flyer Trains also knew that children would love the realism of circus billboards and produced many fine examples of the circus coming to town. One such example is The Ringling Bros. and Barnum and Bailey – The Greatest Show on Earth Billboard (pictured) which actually lit up as each train went roaring by. Also pictured “Skippy the Tricky Cyclist” clown who performs on a unicycle that moves in a zaney and unpredictable way and a tin and felt Drummer Monkey Clown made in Germany who beat a rhythmic tune and vibrates on a flat surface.

No tin wind-up circus collection would be complete without a Lehmann’s “Balking Mule” – a clown seated on a two wheel wagon is pulled around by a mule who goes a bit then “balks” and then goes a little further. Also pictured is a tin monkey riding a three wheeled bicycle in circles whose ears flap back and forth. This piece was made in the U.S. zone in Germany.

There are circus wagons and there are circus wagons, but there are few to compare with the Pony Circus Wagons put out by the Bibbs Mfg. Co. of Canton, Ohio in 1910. This toy is rich in color and detail showing acrobats, trapeze artists and a group of playful monkeys on each side. Pulled by a pair of horses; the litho graphics on the horses and wagon were done on paper then applied to the toy.

As in all fields of collecting; supply and demand, desirability and quality will all play a role in determining the price of an item. As these fine examples of early circus toys become increasingly rare, their prices too will become very high. Some recent prices for some of the toys shown will well represent this fact as exemplified in some current prices for these items. Some prices (1975) asked were : $55 for a Lehmann’s “Balking Mule”, $85 for a Jumbo The Elephant (if you can find one) and $110 for a Gibbs 1910 Circus Wagon. These of course are for some of the choicest and most desirable items, however, there are still some fine examples of circus toys which can be gotten for only a few dollars.

All in all, the roar of the lions, the grace of acrobats, the crazy antics of the clowns and even the laughter of the crowds can be had in your own home should you become a collector of miniature tin circus toys.